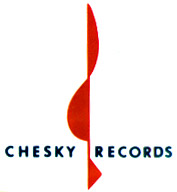 Chesky Records is a record company and label founded in 1986 by brothers David and Norman Chesky. The company produces high-definition recordings of music in a variety of genres, including jazz, classical, pop, R&B, folk and world/ethnic. Chesky Records also offers binaural recordings, which seeks to replicate 3-D stereo sound so that the recording sounds as if the listener is in the same room with the musicians. They capture this sound using dummy head recording. For its recordings, Chesky Records uses acoustically vibrant spaces, including the Hirsch Center in Greenpoint, Brooklyn and St. Paul the Apostle Church located in Manhattan. David Chesky founded Chesky Records with his brother Norman in 1988. They began the label to preserve the sound of live-in-the studio recordings, without overdubbing original records. In 1990, they switched from recording in studios to recording in churches. One of the company's first attempts at improving sound quality was the re-issue of classical pianist Earl Wild's recordings of Rachmaninoff for Reader's Digest. In 2007, David and Norman Chesky also started an audiophile music download website called HDtracks. HDtracks allows customers to download high-resolution versions of albums in numerous formats (FLAC, AIFF). (Rondo DB)